Interfacing with Lutheran Church leaders, pastors and communities of faith was the primary reason for their March visit to Ukraine. Providing collegial support to indigenous pastors, through an EEMN Regional Learning Center Conference, was the practical way they were able to share a biblical foundation and tools for leaders to implement an intentional disciple-making model within their local ministries. 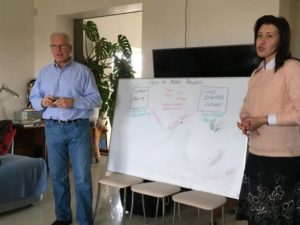 Ukraine is one of the east European countries that endured more than 70 years of Soviet, scientific atheist rule, which left multiple generations of spiritual orphans in the wake of the fall of the Iron Curtain.

There is no older generation of believers — no grandmas and grandpas, no fathers or mothers — to lead, teach and guide younger generations along the path of faith. The concepts of knowing a Father in heaven who loves you, having brothers and sisters in Christ, extending forgiveness to others, and the sure and certain hope in Christ are lost in a world cast in the long shadow of its atheistic past.

Almost 28 years after the fall of the Soviet Union, there is still only a small contingent of believers who are desperately trying to fan the flames of faith in a society that still functions largely in its Soviet past.

The visit by Bishop Bradosky and Pastor Buba was landmark and was healing in many ways. In recent years, there have been great struggles for power and sharp divisions that have polarized the Lutheran churches in Ukraine.

The German Evangelical Lutheran Church in Ukraine (DELKU) had been in great turmoil and subterfuge under now former DELKU Bishop Sergei Macheveski. Since his 2013 installation, the former bishop inflicted much damage to that church body; including defrocking pastors, attempting to revoke baptisms, seizing and selling church property for personal gain, and creating massive division by intimidation within the synod.

Such was his hold in Ukraine that, after a formal appeal was made by the large contingent of disenfranchised DELKU pastors to the Lutheran Church in Germany, an acknowledgment and approval by German Chancellor Angela Merkel was required before a new bishop could be consecrated and installed.

Thanks be to God, this was accomplished in Kiev, Ukraine, on Dec. 3, 2018. Pastor Pavlo Shvartz is the new presiding, interim bishop of DELKU. The synod will elect a permanent bishop during their autumn 2019 presidium. 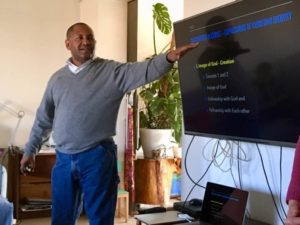 Although there is still much healing to be done, DELKU is ready to move forward in what the Lord has for them. Bishop Pavlo is a genuine servant of the Lord who leads by example and has a genuine heart for mission and outreach to the communities they serve.

DELKU is one of three primary Lutheran church bodies serving in Ukraine. However, the previous DELKU bishop’s wrangling affected every Lutheran church and polarized these communities of faith, which normally function within close proximity of one another.

The NALC is the first foreign church body represented that does not desire to manipulate and control the local church in Ukraine. Unfortunately, this had been the experience of our Ukrainian hosts, with other North American church bodies, and is why it took EEMN three years to gain the trust necessary and to coordinate a visit by the NALC.

The first full day in Ukraine was spent getting familiar with the lay of the land and beginning to try and understand the depth of the recent difficulties and challenges that have been inflicted on the local church communities.

Pastor Breidenbach arranged with DELKU Synod President, Pastor Aleksandr Gross, a tour of the Odesa region in order to see, first hand, how congregations in small villages are being affected and to learn just how resilient are these people of God!

The three were able to spend time visiting the villages of Petrodolina and Novogradovka, both of which have had their Lutheran church properties seized and their congregations displaced to temporary settings for worship and community.

The village of Novogradovka is also home to a rapidly decaying Lutheran church building that had been closed by the Soviets, remodeled to look more “secular,” and then turned into a house of culture, as a disco and movie theater.

After the collapse of the Soviet Union, hundreds of Lutheran church buildings throughout Europe and Russia were returned to their communities. Unfortunately, no money was available to rebuild or maintain the structures, and many have been lost to the elements and years of neglect.

Just outside of Odesa, they were also able to visit the SELCU seminary, which is a large, modern facility that offers housing for up to 30 students, and yet currently has only one student enrolled.

Although the former DELKU bishop has been officially removed from office, Sergie Machevski continues to exert political and legal control over the properties that he seized.

Church polity is very complicated in Ukraine and allows for Sergie to “legally” own the congregational properties he seized, even though they are technically church-owned property of DELKU.

On Tuesday, March 9, an historic meeting occurred as the new DELKU bishop, the bishop of SELCU, and a bishop’s representative from ULC sat down and talked, at the same table, for more than five hours!

A meeting of these three church entities had never happened before and was arranged solely because NALC Bishop Bradosky, Pastor Buba and Pastor Breidenbach were in Ukraine to teach and propose ideas about ministry cooperation and partnership.

The venue allowed for the bishops to ask pressing questions of one another and for all participants to share the common vision of our Lutheran heritage and the sufficiency of God’s Word. There were many smiles and pats on the back, as well as a genuine spirit of new beginnings. The visitors from North America were even able to suggest cooperative use of the large SELCU seminary building that remains mostly empty.

Wednesday though Friday afternoon, the EEMN Regional Learning Center Conference was hosted in the small coastal village of Zatoka, which is on the Black Sea. Members from both DELKU and SELCU (including both bishops) attended the conference, where they focused on learning the foundations of biblical disciple-making. They were also joined by Pastor Valery Hryhoryk, NALC global worker and EEMN ministry partner from Belarus.

Over the course of the three days, which included worship, learning and breaking bread together, Bishop Bradosky and Pastor Buba alternated teaching topics that addressed questions surrounding our biblical identity, what being a disciple looks like, the biblical mandate, and what are the keys to establishing a disciple-making culture.

Pastor David led the group through practical application, self assessment and putting their plans to paper for making the shift to an intentional disciple-making model. At the end of their time together, Bishop Bradosky taught an inspiring sending session on the kerygma.

While the topics covered may seem unremarkable for preachers and teachers of the Word to dwell on, for most in attendance they had never heard nor learned these foundational concepts for building a healthy ministry.

The blessings were abundant and flowed both ways, as there have already been requests and suggestions for future collaboration and partnering in the Gospel in Ukraine.

Pastor Oleg Schewtschenko, from SELC, sent this follow up message to Pastor Breidenbach:

David, thank you so much for bringing good teaching and healing to Ukraine once again. It is so amazing to have you come over and encourage the ministers of the churches! This time your visit was very good for our bishop! Like never before he was so open to the teaching and to the work of EEMN (and NALC). He was so blessed with the teaching of the conference and is asking when we can have all three of you over to teach that in SELCU.

To God be the glory! Amen.

Pastor David Breidenbach is executive director of the East European Missions Network (EEMN), a Ministry Partner of the NALC. You can learn more about the ministry of EEMN at eemn.org.

April 26, 2019 at 11:49am
Madeline Benson
Change Location
Find awesome listings near you!