The North American Lutheran Church, a new Lutheran denominational body, was established on Friday, Aug. 27, 2010, as Lutherans from throughout North America voted overwhelmingly and enthusiastically to form the NALC. 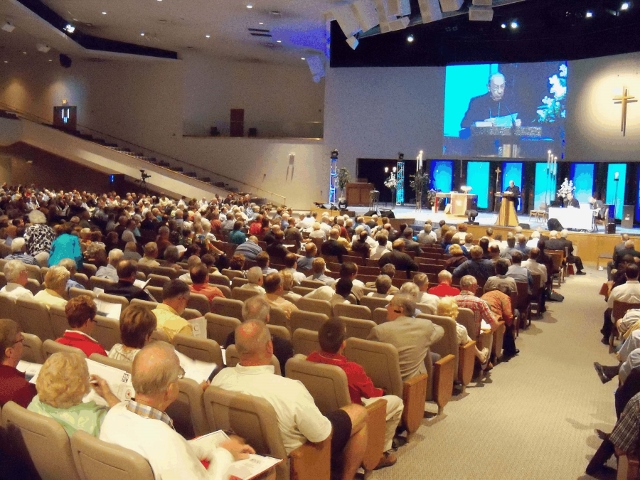 The decision to form the new church body was made at the annual Convocation of Lutheran CORE, which attracted more than 1,100 Lutherans Aug. 26-27 at Grove City Church of the Nazarene in the Columbus suburb of Grove City, Ohio. Thousands more watched the Convocation online.

The Convocation adopted a constitution and elected provisional leaders for the NALC. The Rev. Paull Spring of State College, Pa., was elected as provisional bishop of the NALC. Spring served as the bishop of the Northwestern Pennsylvania Synod of the Evangelical Lutheran Church in America (ELCA) for 14 years.

Spring and other church leaders were elected for one-year terms. Those congregations that join the NALC will elect their own leaders at the church body’s first annual meeting next year. Spring has said that he will not be available for reelection. (Excerpted from the October 2010 issue of NALC News; read more)

Read the minutes of the Lutheran CORE Convocation containing references (highlighted in green) to the formation of the North American Lutheran Church.

To ensure long-term vitality and fruitfulness for our congregations, we must constantly adapt and expand the reach of Jesus Christ by carrying out Christ’s Great Commission. GROW places importance on our ability to expand and mature as congregations of the NALC.

We recognize the fundamental role that strong theological formation plays in the capacity of our congregations to carry out faithful mission work as we thrive and live out God’s word. SERVE — one of the four main components of this vision — lays out the pathway for empowering all NALC congregations to form healthy, authentic Christian communities that serve our world.

Even with the best congregational strategies, our community needs the periodic opportunity to reaffirm its roots while looking ahead to the future. RENEW — one of the four main components of this vision — provides opportunities for all NALC congregations to be renewed by the Holy Spirit.

Our calling as Christians and congregations in the North American Lutheran Church is much larger than ourselves. We belong to a legacy of faith. Through the 2020 Vision, our congregations devote themselves to join God in His work to FULFILL His promises, taking with them our call to discipleship and our core values as we continue the legacy of faith.